packed it all down in an old blanket nice and snug... (part 2) 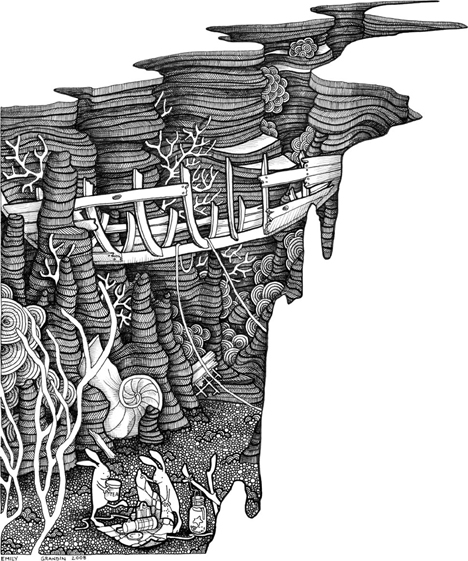 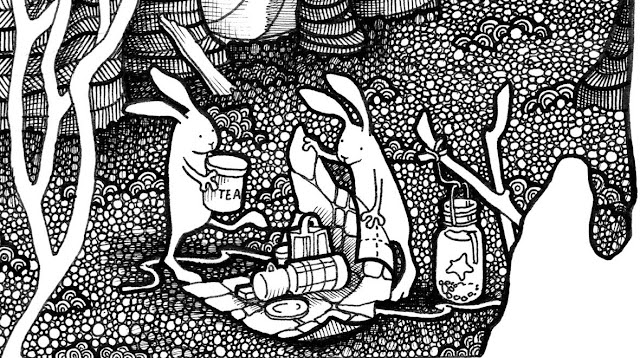 He didn’t want to open his eyes… he didn’t want to believe the nightmare had been real. But the temperature was rising and the sun burned twice as bright in the newborn sky and though his eyes were closed he had to clench to keep them so. He felt a nudge, and a voice said;
“The tree house and the others are gone Dante, and I have no idea where we are, but I've found us a guide!”
Dante heard a sloshing sound.
See!” Zoe continued “meet Starfish!”
Now curiosity had grown stronger than fear and slowly, but reluctantly, he opened his eyes.
Posted by Emily Labels: IF, line work, pen and ink, Zoe and Dante
Email ThisBlogThis!Share to TwitterShare to FacebookShare to Pinterest

What a great little story! Is there more? I love it! Great site.

Emily, your work is always worth the wait. I can see your art becoming more and more detailed and storied, and it's beyond fantastic. It leaves me breathless. I hope this turns into a grand adventure and a book!

Wow, the level of detail on this one is insane! you are really dedicated to this, I bow to you!

I adore your details. Your artwork makes me salivate!!

The deatils are great!
Love your close-up one.
Emily, pls. drop by to collect your awards. TQ.

what a beautiful drawings! great details and super idea! Bravo.

gorgeous wee bunnies!! i love all the textures!

I've been waiting to see what you would come up with this week and as always your interpretation is gorgeous but this weeks little story is an added bonus.. wonderful work Emily!

Wow, just great, Im also waiting to see your post for IF, they really worth the waiting. :0)

I wish them good luck!

Hi Emily...this is a great piece...the details and all the line work are amazing...

have a wonderful weekend!!!

Wonderful illustration, the line work of the canyon is quite hypnotic and I'm loving your story, can't wait for the next episode (no pressure!) :)

You are so busy Evelyne, it's amazing! Love this illustration too, they're all spectacular!

Thanks so much for the cards, I've received them in the mail yesterday. Everyone should ask emily for postcards, they're looooovely!!

Absolutely amazing! I really like your style and clean lines.

Are you doing these in Illustrator? I think I recognize some brushes, but am not sure since I do most of my digital work in photoshop.

Gosh no! The only illustrator is me! These BW illos are pen and ink with just a small amount of digital touch up... to clean off scanner dust and residual pencil lines!

Thanks everybody for the kind words!

And yes the story will continue...

Awesome! I am blown away and so sorry :).. I'm used to so much digital art that I've goofed... yikes, this is a bad sign that I'm loosing my ability to distinguish.

Actually, it means you are doing some beautiful work! Fantastic! Bravo!

What an adventure. Your work is fantastic. Thank you for your encouraging comments re the "packed" Illustration Friday on my blog.

another intensely beautiful illustration, i love the way you work the line and your detail is...awesome

Epic. [great style by the way]

Oh my - I just can't wait to find out what happens next in this bunny adventure. Did you know you would be writing an illustration friday story book week by week? I'm just loving what twists and turns you are coming up with!

aww thanks for the nice comment. there's a whole slew of story that built up in my head with that particular illustration. Might do more. I'm really glad I stumbled upon your illustrations they're beautiful.

Your unique use of negative space is insane...insanely awesome!!! How great that would look on a wall...

Holy cow, how on Earth did I miss this? This is AMAZING!!!!

Wonderful drawings as always! Poor bunnies, I hope the starfish knows where it is going and I wish they had more than wet matches and an orange teacup to see them on their way.